Discuss Begginers questions in the Electrical Forum area at ElectriciansForums.net

I was wandering if i could possibly ask for a little help!

At work at the moment we have been installing ring mains and lighting circuitry but i'm a little foggy on how a 3 core cable works with a permanent and switch live.

Any answers would fab.
Thanks Ben

This official sponsor may provide discounts for members
A

Maybe its me but Im not sure what you are asking so I am making an assumption here that with the 3 core you are referring to lighting.

If you are asking something totally different ignore me

3 core cable is only used for 2 way lighting. Do you mean T&E ie one brown (phase), one blue (neutral) and one yellow/green (earth).

If you mean T&E then basically you have a Live, a Neutral and an earth coming in from your CU to your ceiling rose. The live goes to a terminal called Permanent Live, Neutral to Neutral and Earth to Earth. You then have what is called a Switched Live, it's a cable from the Permanant Live down to the switch and back up to a terminal in the ceiling rose seperate to the permanent live called switched live. (Remember both wires in a switch are Live). Then Phase from the Switched Live terminal to the light bulb, Neutral from Neutral in ceiling rose to light bulb.

I have drawn a simple diagram, hope this helps.

Just ask if you're still not sure

A 3 core and earth can also be used for a switch drop from a ceiling rose.

This would carry and perm live, the switched live and a neutral so that for eg, a single cable can be run from the 2 gang switch to an outside light.

Thanks Jason I didn't know that. How does it work?
A

I agree thanks Jason didnt know that either if we said pretty pretty please could you do a diagram as to how it works when you get a chance.

notabrightspark said:
Thanks Jason I didn't know that. How does it work?
Click to expand...

2 gang 2 way switch. use 2 cores for the rose as normal. loop the switch feed to other switch.

T&E from switch to outside light. L1 switch feed to light, last remaining core of 3c connect to neutral in rose and neutral for light in switch.

Hope that makes some sort of sense.

Ill do a diagram in a bit.

Yes its a very bad drawing but gives you the rough idea. 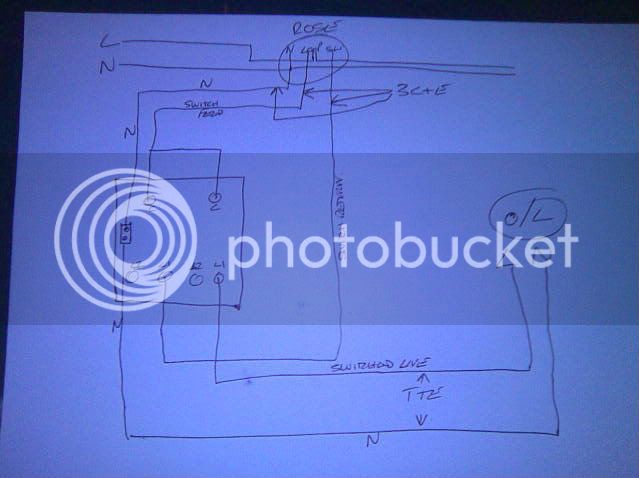 Another common use for 3-core & cpc is in the supply to Timed extractor fans...here again you have Permanent line.....switched line ....neutral ..and cpc

Big thanks to everyone for the replys and diagrams, big help. Sounds like im not the only one who found this question usefull.

I have a much better understanding of 3 core now, this forum rock's

I must admit the drawing's looked quite intimidating at first but now it's starting to make sence. . . WooHoo.

Big thanks again to everyone for helping me.

I'll have the next question ready for you all soon lol

Is there a reg on identification of cores. I use the grey as neutral and sleeve blue and the black as switched live (sleeved brown). A lecturer quoted this and I have stuck with it. Cant find any reference.

Daver you are correct in what you say......black & blue sleeved brown and grey sleeved blue....the intention is to get away from the presumption that black is neutral, cos in 3-phase it is now a line conductor.

spark1 said:
Daver you are correct in what you say......black & blue sleeved brown and grey sleeved blue....the intention is to get away from the presumption that black is neutral, cos in 3-phase it is now a line conductor.

spark1 said:
Another common use for 3-core & cpc is in the supply to Timed extractor fans...here again you have Permanent line.....switched line ....neutral ..and cpc

also smoke alarms, L.N and link
and outside lights if you have a pir or solar switch ,permanent L.N and switchwire plus cpc of course

Reply to Begginers questions in the Electrical Forum area at ElectriciansForums.net