Discuss Can 4 30A circuits run a heater with 2 60A inputs? in the DIY Electrical Advice area at ElectriciansForums.net

Pictured is the L1/L2 terminal block of a 28kW tankless heater. The heater has 4 30A heating circuits connected to the terminal block, two leads per terminal. The other side of the terminal is supposed to be fed by 2 60A circuits, each powering 2 heater circuits. Is there any concern about changing out the terminal block to accept 4 30A inputs, each powering one of the heating circuits? I'm replacing a Seisco heater with an AO Smith (bought Seisco) of nearly identical design, except for the power connection. Smith says the modification isn't possible; I think it is but I don't know it. 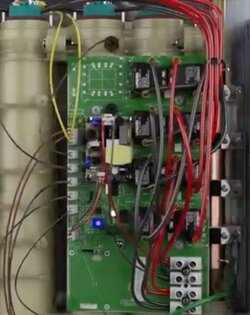 Sort by date Sort by votes

In theory, it may be possible to adapt it.
HOWEVER, going against manufacturers recommendations is a BAD IDEA.
I doubt you will find anyone who would tell you that this modification is ok.

I certainly DONT RECCOMEND IT.

Thanks James. This is an instance where I can afford to go against manufacturer recommendation; provided, however, that I don't run afoul of electrical theory. I'm in semi-remote forest and have had to turn many projects that are best left to the pros into DIY adventures. Fortunately, I did pass the electrical theory exam and for two years worked as a marine electrician repairing circuits on submarines, cruisers and carriers. On the other hand that was 43 years ago. My capabilities fall into the category of electrical handyman, not real electrician.

Running 6 awg and using 60A breakers is one solution, however it's last on my list due to the challenges presented by the non-traditional construction techniques used to make this house resistant to wildfire (or any fire). Modifying the AO Smith from 2 60A lines/4 30A loads to 4 30A lines/4 30A loads seems to be both the simplest and least costly fix. Another possibility, though less appealing, is plumbing two Stiebel Eltron 14kW units in tandem since their lines in are 30A.
Upvote 0 Downvote
OP
M

Happy ending. The tankless modification was straightforward and all works as it should. The unit uses a terminal block to connect 60A lines to paired 30A loads. The load side is simply paired #8 insulated aluminum jumper wires, from screw terminal to their individual PCB spade connectors. Separated the pairs, added a second terminal block, fired right up.


The only exigency involved a sharp pocket knife vs human flesh (mine). Iodine, a bandage, a dram of scotch – almost good as new.
Upvote 0 Downvote

Master Rube said:
Pictured is the L1/L2 terminal block of a 28kW tankless heater. The heater has 4 30A heating circuits connected to the terminal block, two leads per terminal. The other side of the terminal is supposed to be fed by 2 60A circuits, each powering 2 heater circuits. Is there any concern about changing out the terminal block to accept 4 30A inputs, each powering one of the heating circuits? I'm replacing a Seisco heater with an AO Smith (bought Seisco) of nearly identical design, except for the power connection. Smith says the modification isn't possible; I think it is but I don't know it. View attachment 90578
Click to expand...

I’ve got to tell you NO. Wire the heater per manufacturers instructions. Please never try to modify a piece of equipment. You are also saying you want to parallel each set of heaters with # 10 wire which is good for 30 amps. That is a code violation because you can’t parallel wire no smaller than 1/0 wire
Upvote 0 Downvote
OP
M

The modification was made days ago and the tankless appears to be functioning properly. I've posted the modification at a product review site that is monitored by Smith, so perhaps they will comment with something besides "it's not possible." A good reason not to make the modification might exist – I simply don't know what it is.

The original Seisco (Microtherm) version of this heater was configured to accept four 30A lines or two 60A lines. In the latter instance, heating circuits 1 & 2 were jumpered together on the board by the user, as were 3 & 4. I did the installation/wiring during house construction and went for the 4x30A scheme because that was Seisco's default wiring.

Smith acquired Seisco in 2017 and eliminated the option to connect four 30A lines; as best as I can tell, I've done nothing more than resurrect the 4x30A scheme that Smith discarded, but I'm no PCB expert. According to old Seisco literature, initially, 4x30A was the only wiring allowed by the NEC for use with its 28kW heater until a revision permitted 2x60A to be substituted. If Smith responds to my post I'll note it here.
Upvote 0 Downvote
OP
M

Update. AO Smith did not respond to my post re the modification. I suspect that's because it's less of a modification to the Smith than it is a restoration of Seisco-like functionality. I recently found a damaged Seisco board (fried triac) in my electronics junk drawer and the backside of it tells the tale. The board may be connected to 4x30A via 8 aluminum PCB lugs, or it may be connected to 2x60A via 4 of those lugs and 4 jumper wires to the other 4 lugs. Either way it's connected, each of the 8 lugs is screwed to its own fat PCB trace, soldered to which is one spade terminal (jumper) and one relay energized by the connection.


The Smith replacement unit is 2x60A only. It eliminated the 8 PCB lugs and replaced them with an isolated 4-terminal quick-connect block, and it replaced the 8 wide PCB traces with 8 jumper wires that connect the quick-connect block to the 8 relays. I added a second 4-terminal block and moved 4 of the relay jumper wires paired on the original quick-connect to it, effectively restoring the ability to connect to 4 30A breakers. It was a $12 solution as opposed to the alternative, which involved tearing into finished. insulated ceiling (wire runs perpendicular to the joists) and ICF walls to run 6/2 wire to 60A breakers.


Pictured: the front and back of Seisco boards. The Smith is similar but uses #8 aluminum jumpers in lieu of high-amp PCB traces. Whether connected to 4x30A or 2x60A, Seisco or modified Smith, each relay passes the appropriate current when the microprocessor calls for power. Or so it appears. The modified AO Smith maintains constant temperature and house lights don't flicker during operation. I'm redrawing the unit's wiring diagram and calling it good.

Last edited: Oct 19, 2021
Upvote 0 Downvote
You must log in or register to reply here.
New posts

Reply to Can 4 30A circuits run a heater with 2 60A inputs? in the DIY Electrical Advice area at ElectriciansForums.net

J
Sump Controller
Can't seem to figure out the issue on a sump controller I am working on. It is a pre-built controller box, set up for two pumps (lead/lag pump...

How to plan a rewire and new consumer unit. How many circuits, what cost?
Hi, we need some advice on our scenario with regards to our rewire plan. I will get this out of the way first... We are planning to put the house...

F
Problem With 2-Way Heater Switch Setup
Hello everyone! Need as much advice as I can get. This issue has stumbled a few certified electricians. Hopefully, with the wealth of knowledge...