Dodgy trade pic's for your amusement!

Discuss Dodgy trade pic's for your amusement! in the Electrical Forum area at ElectriciansForums.net

TLC stock it too I think.
S

Strima said:
DC colours are either brown and blue or grey and blue dependant upon polarity.
Click to expand...

CEF only do Grey & Blue. I ended up buying direct from Cleveland Cable who do all the standard colours.

As an aside a lot of DNO/suppliers don’t allow the use of tri-rated cables as their equipment terminals aren’t designed for fine stranded cables even with ferrules.
Click to expand...

Useful to know. What are the issues ?

Simon47 said:
Useful to know. What are the issues ?
Click to expand...

Ferrules are only made of very thin material and most DNO/suppliers terminations are designed for the thicker stranded cables, at a guess the screws damage the ferrules allowing fine conductors to splay out causing loose connections. Also the ferrule slightly increases the size of the conductor so some may be very tight to get in without 'modification'.
S

Strima said:
at a guess the screws damage the ferrules
Click to expand...

That shouldn't happen - if it does then the screws would also damage thicker stranded cable as well. The screws should have a flat end, which won't be a problem unless done up by a gorilla on steroids - something which would damage the thicker strands as well, if not more so.

Nope. The ferrule should still contain the strands even if you cut a round hole in it with a badly formed screw. There's a risk of cutting strands, but then the loss of a small number of fine strands would have a proportionately smaller effect on the cable than cutting strands on a 7 or 19 strand cable.

Also the ferrule slightly increases the size of the conductor so some may be very tight to get in without 'modification'.
Click to expand...

Now that I have met. Found the hole in the CU earth bar was a "snug fit" for an uncrimped 16mm ferrule, but a crimped ferrule had to be "carefully adjusted" to fit in it.

So basically the arguments come down to :
"Makes the cable too big" which could be valid, except doesn't most of this stuff now come designed to take something like 35mm cable ?
The terminal design/manufacture is defective

A while ago I tried to search for such restrictions and couldn't find any. The only reference I could find in any DNO documentations related to (IIRC) earth connections in substations where the minimum strand size was 2mm.

Simon47 said:
won't be a problem unless done up by a gorilla on steroids
Click to expand...

We are talking about DNO meter fitters here.

Mentor
Arms
Esteemed
so not a gorilla on steroids.... a monkey on smack.
S

Arms
Esteemed
Mind you, at our church we had the opposite problem - the meter fitter must have left his 'driver at home because he didn't tighten any screws I'm quite serious, it's a good job some connections weren't heavily loaded.
There were tails into one of the isolators held in by gravity. And a neutral held into both the meter and a henley just by virtue of it being stiff - and he didn't get all the strands in at one end either. The DNO engineer who'd come out to answer my enquiries regarding supply characteristics was "unimpressed" - you could move every cable in it's terminations and we spent a while doing them all up before he put the fuse back and re-sealed everything.

Mod
Mentor
Arms
Esteemed
Here's a quality install... discovered this after turning off what I assumed were the lights for a couple of fitting changes only to find they were still live. 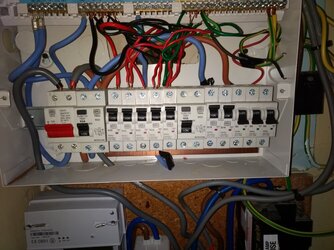 Lights on a 32A breaker. Clearly whoever did this lacked even the most basic of understanding. Big knockout opened on the top surface as well.

Rented property, young family with kids. Unsurprisingly no stickers, no circuit schedule, no labels... nothing. This is the worst one I've seen. Client also asked me to look into why the two way switching wasn't working... my guess would be the same clown worked on them and screwed it up.

Arms
Esteemed
Right.... we’ve got excess copper showing at the terminals, holes knocked out for no reason... tails entering 2 different holes....
Second rcd not in use. (What have they done there? Chopped the pins off the bus bar?)

At least it’s a metal board, and they’ve managed to keep all the breakers the same manufacturer.

Mentor
Arms
Esteemed
Hard to tell, but looks like the unused RCD has L & N outputs fed from the busbar?

Just possibly the installer didn't know what to do about that (hopefully not after having blown the house service fuse!), and rather than cut the busbar, thought it safer to just remove the N connections to/from the RCD?

Arms
Esteemed
All the bits are there to fix this board up. Apart from a few blanking grommits.
The busbar appears to be able to be cut, or snapped apart to feed the right hand side split... Swap some of the breakers around to share across the 2 RCD's and connect the RCD's up with the internal wires that are there taped up. Theres 16 and 6 amp mcb's for the lights.
Im thinking now the busbar hasnt had any pins taken off, and its connected to the outgoing side of the rcd. Dont know if that can damage the rcd or not.
Busbar needs its insulating cover though.

Wiska gland for the tails, just need to drill out one of the holes to make it bigger.... I see an isolator i think.. makes job a little easier.

I see another set of tails... where are they going?
D

I thought it was one of my better efforts.....

Dustydazzler said:
I thought it was one of my better efforts.....
Click to expand...

when you were 4, before you went to specsavers and using an ivory (ie: 'Insulated') handled knife as a screwdriver. ;-)

Arms
Supporter
Esteemed
Wow! It must have taken quite some effort to get it that bad, some serious skill level there. It's like absolutely everything is wrong.

Arms
Esteemed
Did they use an oxy acetylene torch for the rear knockout?

It must have taken a bit of effort to get so much wrong.

I mean atleast they fitted the rolls Royce of consumer units

Dustydazzler said:
Is it really that bad...?
Click to expand...

Yes it is, they couldn't even be bothered to remove the knockouts on the sides, just folded them in!

a beautiful work of art... is there neutrals connected to the earth bar there and floating earths... presumably this was causing a few trips ... now and then . Absolutely atrocious.

Arms
Supporter
Esteemed
I missed the busbar going right across, I couldn't understand why the cables to the 2nd RCD were taped up. That's incredible!!!1!!

Arms
Esteemed
Got a job to connect up a dishwasher next Friday, they can't plug it in as the original was only connected up with wires, house is less than ten years old and they're the second owners.

Asked for a picture so I could see what they meant, needless to say I will be going around a bit earlier to sort it out:

Arms
Supporter
Esteemed
The green tape should have been for the earth wire!
B

Arms
Esteemed
What’s wrong with that? It’s got tape on it.

Presumably it was on a connector block...

Arms
Esteemed
"As an aid to the correct identification of individual conductors, the use of clear polythene is recommended"
I can't remember which Reg. this is, off the top of my head...

marconi said:
Sparkychick - can you name and shame to the 'authorities'? It looks recent.
Click to expand...

Alas no, there is nothing to give any clue who did it (not surprising), but it's a rental property. Speaking with the tenants Mum, it was like that when they moved in. She was going to raise holy hell with the agency and she wants me to go back and check it when they've apparently fixed it.

If it had been their own place, no doubt I would have been given the green light to sort it.

Someone asked about the other tails... they go to another small CU which I think deals with a shower. Again, no labelling, no stickers to give a clue who did it. I suspect it's the work of the landlord. The funny thing is, two of the 6A breakers have scrawl on them suggesting upstairs and downstairs lights, based on the age I'd say even without that cracking bus bar screw up they would have had problems with a borrowed neutral on the landing or hall. But to just stick the lighting in a 32A breaker???? Why not move the 6A? Clearly just no clue what so ever.

Arms
Supporter
Esteemed
I’d go out on a limb Sc and say the landlord or relative off is the culprit....

Reply to Dodgy trade pic's for your amusement! in the Electrical Forum area at ElectriciansForums.net