Hello can you help me fix my house?

Discuss Hello can you help me fix my house? in the Electrical Forum area at ElectriciansForums.net

I dont know much about electrics.
Here is the issue.

Electric tripping (not blowing) consistently after about 1.5 hrs.

We narrowed it down to one of the fuzes on the box. When we turn that off the rest is fine. We have unplugged everything systematically from that line to try and find out what it is but nothing seems to be stopping it from tripping.

Whats on the line is the kitchen, and study, so not the boiler.

What would you look for next? Do we find the cables to check for rat bites? (or would this make it trip instantly? Not worth doing?)

Could it be the box / commercial unit?

We called out an electrician once and he disconnected the outside light that was on that line too, but still tripping, and we cant really affort to get out another one.

If you could help me at all that would be hugely appreciated. My dad wants to pull up the floorboards and check the cables. So any advice if this is a good idea or not, or what you would do. Any help would be great really.

Arms
Esteemed
welcome ,in order to find the fault and narrow it down ,it would be advisable to get a spark in and test the circuit .

Arms
Supporter
Esteemed
Are you positive everything is unplugged?

Myady1 said:
We called out an electrician once and he disconnected the outside light that was on that line too, but still tripping, and we cant really affort to get out another one.
Click to expand...

some times its very hard to pin point where that fault lies .

Arms
You say you have unplugged everything but i would re-check. Turning off the switch on the socket will not do it, it has to be physically unplugged. Also make sure that appliances like washing machine, freezer, tumble dryer etc are unplugged. It sounds like a neutral fault to me.

Arms
Esteemed
Hi - sorry to hear your first Electrician didn't fix the fault. I'm thinking you may still have an appliance connected to the circuit as per @Top Cat . Look for any sneaky fused outlets. Has there been any holes drilled in the wall lately?

Arms
Esteemed
op where abouts are you in wales ,on dont say in a field .

Hi, Thanks for replies.

Yes we did get a sparkie. he said it was on the nutral side, not the live side. Not sure what that means really. And he unplugged the outside light leaving just all the stuff plugged in in the kitchen and study and 1 bedroom on the line which we then turned off. I didnt know that about having to actually unplug them so thats really handy. Ill unplugg everything again and see.

We have had some leaks in the bathroom recently which I thought had been fixed. So if it still trips after I unplug everthing from the socket, does that mean it must be some sort of water in the walls. What does it mean that its neutral? does that mean its an applience? Or could it possibly be water damage still? The fact that it trips after 1 - 2 hours, makes me worry that its water damage which would be very expensive to fix I guess.
Also Im in south wales, near carmarthen. Thanks again

Arms
Esteemed
Welcome, What is it that is tripping, RCD, or MCB? Whatever your House sounds like it needs testing by a competent Electrician, did the Electrician carry out any tests, or was it a hit and miss sort of job?

Arms
Do you have a garage or garden shed wired off this circuit?
As far as getting floorboards up to check for rodent damage, that would be an absolute last resort! With fault finding you start with the easiest and work up to the hardest. (If you hear hoof beats don't look for zebras!)

Arms
Supporter
Esteemed
Any idea how old your electrical installation is?
and as @Pete999 says what is actually “tripping”? Post some pics up........but bare in mind it’s nearly Friday evening
Last edited: Mar 29, 2019

beer oclock for some people ,and wine for the gentry people ,what what .

It's the gray one in the middle that's tripping only. 1991 electrics were done. And the electirican didn't do a full check, we thought it was the outside light at that point. 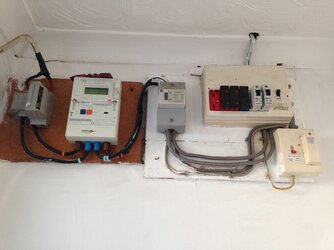 Arms
Esteemed
I get this every time I iron a shirt. Its me best excuse not to iron one.

beer oclock for some people ,and wine for the gentry people ,what what .
Click to expand...

Nothing wrong with a nice glass of vino mat, helps me spell proper like lol

Mentor
Arms
Esteemed
methink OP should ost his location, may be 1 of us reprobates colud be close and pop over for nominal fee (few pints diesel and a couple gallons beer. , or is that wrong way round? )to investigate

Arms
Esteemed
The rules say competent, not competent and sober. Should be OK.

Mod
Mentor
Arms
Esteemed
If the OP was in Cardiff or Newport I'd be up for a Saturday morning jolly, but Carmarthen is a bit too far... even for beer

Mentor
Arms
Esteemed
bloody big area is wales. i could only cover the north, anywhere south of wrecsam is bandit country to me.
D

Arms
Esteemed
What is meant by a neutral fault can be thought of in this way
The trip switch at your mains is sensitive to the balance of current flow down the live and back via the neutral, if its not balanced some is leaking to earth

Usually its an appliance that causes the tripping,in the case of delayed rather than instant tripping the main culprits are usually freezers and fridges
If you run a extension lead from the neighbours and try finding the problem by process of elimination

Paying someone to find a fault and being left with same problem is very annoying,unfortunately people get called electricians when they have no right to such a title
If you do bring in another,be aware he needs to make use of test meters or you are being ripped off once again,its not the sort of problem that can avoid their use

Shister, call out the Marines. I'd be questioning the supplier who installed that meter!
T

Has this happened since or a little while after the leak you mention? I ask as I suspect that it may be that there is some residual moisture in a socket below the leak that may be causing the trip. You might pull the fuses one at a time and see exactly which circuit it is on that way. And perhaps tell us if it stops tripping and on which circuit it stopped tripping on.

Midwest said:
Shister, call out the Marines. I'd be questioning the supplier who installed that meter!
Click to expand...

Vortigern said:
Has this happened since or a little while after the leak you mention? I ask as I suspect that it may be that there is some residual moisture in a socket below the leak that may be causing the trip.
Click to expand...

Have you perused the image OP attached? We best stop here.​
T

Midwest said:
Have you perused the image OP attached? We best stop here.
Click to expand...

??? PM me if it is not for general consumption.

Arms
Esteemed
TT System ,I wonder if a have a stake in the ground ,and not a fillet .

SparkyChick said:
If the OP was in Cardiff or Newport I'd be up for a Saturday morning jolly, but Carmarthen is a bit too far... even for beer
Click to expand...

Mentor
Arms
Esteemed
Sorry OP you need an electrician with an insulation tester who can use it properly. A good spark will find the offending circuit very quickly and then investigate that circuit to pinpoint issue.

Reply to Hello can you help me fix my house? in the Electrical Forum area at ElectriciansForums.net