Discuss RCD on existing circuits in the Electrical Forum area at ElectriciansForums.net

Hi guys, been doing some work on a kitchen the CU is a Crabtree Starbreaker Board which has no RCD! As we all know installing to current regs requires the install of RCD?
The kitchen is fed via two circuits one radial and the other side on the ring final, the board cannot take RCBO's that i know and the only way i see of doing this is to install a separate enclosure housing an RCD and two MCB's covering the circuits in question.

What are you ideas or how have you guys gotten over this issue?

Mod
Mentor
Arms
Esteemed
change board cheapest way as you will need one point of isolation to also comply with regs so when you start adding an isolator, 2way board and rcd cover it becomes cheaper to change the lot but then you need to inspect the existing install. Hope you not part way through the job as this should have been highlighted and quoted at the beginning.
L

Im pretty sure you can get RCBO's for that board (think theyre in Electricfix catalogue).

If not, just fit two RCD's in two enclosures butted upto the C.U.

Mod
Mentor
Arms
Esteemed
I see your thinking londonlec and yes it would comply but when you start paying for fitting 2 rcds to fit them inline with the circuits then not only does it become a bit of a poor design but your not far off from been able to buy a 17th edition board fully equiped, he does suggest he started work on kitchen so hoping he hasn't submitted a qoute as the customer could refuse to pay from any extra's and for him to meet regs he may find himself paying out of his own pocket.
Although rcd's could be fitted in same enclosure and marked up with re' more than 1 circuit within etc, but i would have given customer a pre-empt' on the need to replace the board and the benefits to all existing circuits and safety of family is increased, ive personally never had a customer decline the board change and some have even withdrawn the original job in favour of paying for a new board with scope to having the work they wanted doing at a later date.

londonlec said:
Im pretty sure you can get RCBO's for that board (think theyre in Electricfix catalogue).

If not, just fit two RCD's in two enclosures butted upto the C.U.
Click to expand...

Ditto. Also try Gil-lec online. Garage cu would be my best option. Specially with the price and hassle of a periodic and then a consumer unit change if you haven't quoted for it. Mind perhaps should have given the option of a complete CU change before doing the work?

Mod
Mentor
Arms
Esteemed
Smaps' as it seems rcbo's are available as joe and london suggest it could be a get out of jail card for you but hope you heed my advise as this could have be a dent in your own pocket, hope you've checked the compliance of the existing bonding too as this is your responsibility to ensure it complies before doing your work.
S

Customer on a tight budget so wont go for new board i have included Rcd enclosure in my original quote so im covered just wondering on other options. The starbreaker is old nineties style will the current type RCBO's fit do you know?
S

That is the board? I have also done bonding and earthing. I am just wanting to know about the MCBs/RCBO's
Cheers

Mod
Mentor
Arms
Esteemed
Plenty of them customers about and they makes me laugh that they will put a small electrical job before having a board change that will dramatically increase the safety of both family and property it a bit ar** about t** in my mind but sometimes you just cant teach common sense.

Snapester said:
Customer on a tight budget so wont go for new board i have included Rcd enclosure in my original quote so im covered just wondering on other options. The starbreaker is old nineties style will the current type RCBO's fit do you know?
Click to expand...

Have a look online and you will see what the design is. TLC are a cheap place to get starbreaker RCBO's, if they do fit.

This is what i think is what your looking for but been 2modules i doubt you'll have room, and if you do then at £72 for 2 you can get a full dist-board fully equiped, i think a chat with the customer may get you a board change if you explain you'll do it for the same quote but would require to add an extra for the testing of existing....
S

I will go with a separate unit as quoted i was just wondering if the current starbreakers would fit but clearly not.
What a pain ah well!
Cheers

Mentor
Arms
Esteemed
I have just fitted two RCBOs to an existing Crabtree Starbreaker board, they do fit, it is slightly tight at the top but not at all bad.
The best bet is the board change but as they will not go for that then use the RCBOs.

Sorry just check darkwoods post below as I may not be correct.
Last edited: Jul 31, 2012

Mod
Mentor
Arms
Esteemed
Rich ive dragged my 1996 copy of crabtree out and the rcbo's are double module width, are the ones your on about single width and/or compatable with his board which is also from the 1990's

Mentor
Arms
Esteemed
Hmm, the ones I mean are single width ones and the board I was fitting to was probably about 90s maybe into 2000, can't remember the label date on it, certainly did not look as new as the one there is a link for above!
I would expect that if the board only takes double module ones would mean they are not compatible.

I am adding to my post above because I do not want to provide faulty information.

Have you tried contacting crabtree and asking them ?

Mentor
Arms
Esteemed
i've got a couple of starbreaker boards for spares. both have RCDs, if you can post a pic of trhe board that you have, they may be compatible.
S 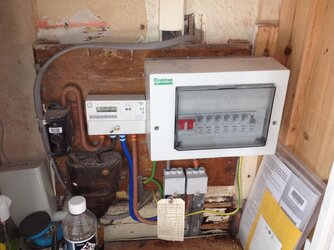 This is the board in question.

Mentor
Arms
Esteemed
similar to those i got. trhe RCDs take up 2 module spaces though. would leave you short of space, unless you were to replace the main sw with RCD and have up front RCD, not the best way, but cheap. i'll dig the things out later and post a pic.
S

I didnt think you were permitted to change the main switch to RCD? It was something i had thought about?

Mentor
Arms
Esteemed
you would fall foul of the division of circuits to minimise inconvenience due to a fault tripping all circuits out. end of the day, it's your call as to what the customer will pay for.

Reply to RCD on existing circuits in the Electrical Forum area at ElectriciansForums.net