Recommend me a small CU with DP MCBs / RCBOs

Discuss Recommend me a small CU with DP MCBs / RCBOs in the Electrical Forum area at ElectriciansForums.net

I need to go shopping in the morning for a small metal CU, about 5 outgoing circuits, but they have to be fitted with DP OCPD including some C-type. One overall RCD is OK but if I can get suitable RCBOs that is a possible. It's so rare that I fit a small single-phase board, I've no idea which brands are likely to have a selection of DP components in stock at normal wholesalers (Eddies & WF round the corner for prefs).

FWIW it would have been easy to get in Estonia but I've popped back to London and didn't think to bring with me.

Arms
Esteemed
Good luck getting any DP MCB's/RCBO's off the shelf!

Best bet might be a Wylex RCBO board. I think they are single pole switched neutral if that's any good.

Mentor
Arms
Esteemed
SBS trade sales do DP compact RCBOs but are mail order only. Not sure on your timescale.
I think Wylex also do a DP RCBO range but I don't use them myself.

Schneider acti 9 would be a good bet as they do a huge range but maybe not off the shelf.
B

+1 for SBS sales, from the photos and reviews from members it's good stuff.

Handy also as they are the same form size as a standard MCB.

Mentor
Arms
Esteemed
OK I'll bear them in mind, but in theory I need to be fitting it in the morning...

Mentor
Arms
Esteemed
OK, that looks like the stuff to have, especially because they have C-curve RCBOs with A-type residual tripping, which ideal for the large SMPSUs running on a couple of the circuits. But I really want to install in the next 36 hours before I return to Estonia. I might throw something together for now, then get the SBS stuff sent with it to Italy (it's on wheels) where I will be meeting it, and swap the board out in downtime.

Thanks for the recommendations, I think you've cracked it. If I had known to ask the question a few days ago, could have done it in one hit. 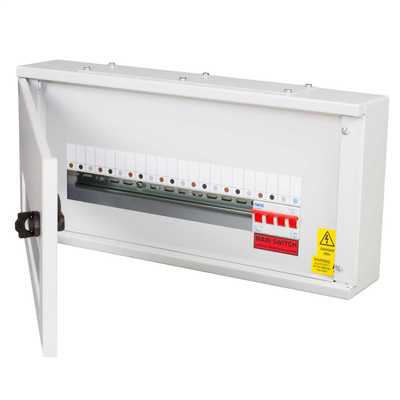 Reply to Recommend me a small CU with DP MCBs / RCBOs in the Electrical Forum area at ElectriciansForums.net