Discuss Recommendations for metal cable fixings in the Electrical Forum area at ElectriciansForums.net

I am planning a job in Bath for an EV Charger on a Grade 1 listed building.
Have a long cable run at height, planning dept have raised issues with cable cleats! feel they are a bit chunky and would prefer something with a less chunky profile!! given they are nearly 2 and half stories up from ground nobody is going to notice! but the planning guy is a pedantic so and so.
Have also stipulated that cable and fixings must be painted on completion to blend in with Bath stone.
Owing to the length of cable run I will be using H07RNF - lighter and easier to work with up the scaffolding than SWA. Customer doesn't mind cost.
Only low profile option I can think of is metal cable ties and bases. base screwed to wall then tie cable. paint on completion.
If I used metal buckle clips then they are a bit fiddly to work with on larger cables.
Any other suggestions?

Mod
There are lots of cable support options about now thanks to reg changes, these are fairly unobtrusive. Electric Centre catalogue also has them. 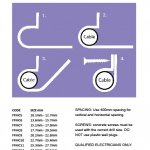 www.fireflycableclips.com
In echoed steps I walk across an empty dream.

westward10 said:
There are lots of cable support options about now thanks to reg changes, these are fairly unobtrusive. Electric Centre catalogue also has them.

Arms
Esteemed
I didn't consider metal p clips as I haven't used them on anything larger than 2.5mm flex. I am using 10mm 3 core H07 so will go and have a look at the options
D

They are indeed.
In echoed steps I walk across an empty dream.

Mentor
Arms
Esteemed
Have you considered hituff/NYYJ cable as an alternative to H07RNF?

Arms
Esteemed
More interested on how your going to paint the H07RNF?

Once its on the wall the customer is going to paint it, hes a funny guy. extremely intelligent and wealthy but wants me to do electrics then as he likes to dabble in a bit of watercolor and oil painting in his spare time has decided he wants to paint it himself.
He will have scaffolding up to get up so no problem for him.
council have specified the paint type, make and colour as part of palnning

davesparks said:
Have you considered hituff/NYYJ cable as an alternative to H07RNF?
Click to expand...

Considered a lot of options for the cable but due to several awkward spots in routing cable behind or around things opted for H07 due to its more pliable qualities. SWA would have been a right ball ache even if cheaper.
H

Clear p clips would do the job

Arms
Esteemed
I'm not aware of any paint, that would adhere to rubber, over time at least?

Edit; I've just googled, and see you can. But I'm not convinced.
H

Or you could use these

Arms
h901 I've used those before with wall dogs for a 6mm 3c H07 and steel ties, worked well and looked neat can't fault them!

Mod
Mentor
Arms
Esteemed
You could also check out the Linian Fire Clips... drill the right size hole, put onto the cable and push into the hole and they are done. Come in a variety of sizes and colours.

Mentor
Arms
Esteemed
2nd for the Linian. pricey but time saving.
Watch Out.... Scouser About. Some say that my balls are permanently connected to a 415V supply. All you know is that I am called "The Tel"

Reply to Recommendations for metal cable fixings in the Electrical Forum area at ElectriciansForums.net