Discuss Split MCBs on consumer unit in the Electrical Forum area at ElectriciansForums.net

Hi all.
How would you split MCBs where there are two ring final circuits (so better separate them). There is one electrical shower (will be on 40A).
Any ideas?
TNS system. 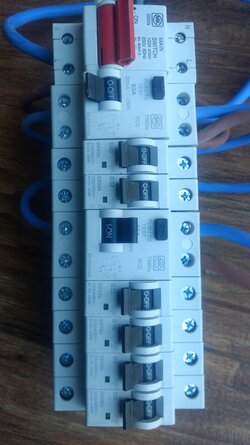 Arms
Esteemed
have you taken that out a cant put it back ?
D

Arms
Esteemed
does it not come complete with metal backing or is the wood the back box like the old wylex consumer units .
M

buzzlightyear said:
have you taken that out a cant put it back ?
Click to expand...

I can put it back but you cannot read the question.

Arms
Supporter
Esteemed
Those ARE the serious ones......
D

what made your emove all the gubbins in the first place ?
G

Bit of a random question. But if it was me I would put shower sockets and lights on one side. And sockets whatever the 16amp breakers for and the other lighting circuit on the other rcd.
C

Hope your main OCPD is 63A or less.
C

Mentor
Arms
Esteemed
Also MK are dog shyte mains boards, get a hager for the same price and thank me later.

Mentor
Arms
Esteemed
I'd use RCBOs

the special police detective is on the beat .LOL.
D

yet to have a customer ask for one of those
C

Mentor
Arms
Esteemed
Of the around 10ish mains changes ive done this year only 1 has turned down the SPD.

Arms
Oh didn’t realize it was down to the customers to do the design..
I can rip out that whole new section on SPDs
M

I forgot to add that there is only one circuit for lightning.
C

I forgot to add that there is only one circuit for lightning. So that is why I would do like on photo.
C

Mentor
Arms
Esteemed
As above, RCBO for the lighting as a minimum.
M

ChrisElectrical88 said:
Also MK are dog shyte mains boards, get a hager for the same price and thank me later.

Yeah , another advice on topic ))
M

ChrisElectrical88 said:
As above, RCBO for the lighting as a minimum.
Click to expand...

There is no RCBO , why would I put RCBO like I have MCB 6 A for light.
M

buzzlightyear said:
does it not come complete with metal backing or is the wood the back box like the old wylex consumer units .
Click to expand...

I took it out for a reason. It's on my floor
C

Mazak said:
Yeah , another advice on topic ))
Click to expand...

Mazak said:
There is no RCBO , why would I put RCBO like I have MCB 6 A for light.
Click to expand...

If you dont like when i go slightly off topic dobt read it, i was asking where the SPD is, its relevent to the work your doing.

The RCBO is common sense if the house only has 1 lighting circuit to cause minimal disruption to the customer in the event of a fault.

I dont think you should even be fitting a mains board if you have to ask such a basic question such as how to lay out the circuits.
C

Mentor
Arms
Esteemed
Also you havent answered the question on weather the main OCPD is 63A or below?

Arms
I think I know why the OP has taken the guts out of the board; perhaps he doesn’t want us all to see the cu installation ..
Please take a photo of the consumer unit

Mazak said:
I forgot to add that there is only one circuit for lightning.
Click to expand...

So you have put in an spd then

Arms
Esteemed
Patron
Are you DIY? No shame if you are, but an electrician wouldn't need to ask which circuits to put on which side of a CU.

Charlie_ said:
So you have in an spud in then /QUOTE ]
Click to expand...

yes a king eddy atgas marked 9 in the microwave .

Oops and now it’s just tripped the rcd, taking everything out apart from the shower, watch you don’t fall over them on that lovely wooden floor

Arms
Always put the most power draw next to the main switch. split them like said above! dont install them like you have in the picture though!
you need some spare spaces on both sides of the board.

If there's only one lighting circuit, what's the second 6A MCB?
The split is how I would do it, with the ring on the same side as the shower being the house ring, rather than the kitchen ring. This is to even out the load between the two sides, and is less likely to plunge the house into total darkness if the RCD on the lighting side trips, since there may be table lamps/ TVs on the house ring.
This won't comply with the current regs unless the fuse/cut out supplying this board is rated at no more than 63A. The LH RCD would have to be rated at 80A with a 40A and 32A MCB fed from it.

Reply to Split MCBs on consumer unit in the Electrical Forum area at ElectriciansForums.net