Discuss The work van of today , very much different to the work van of yesterday in the Electrical Forum area at ElectriciansForums.net

This official sponsor may provide discounts for members
J 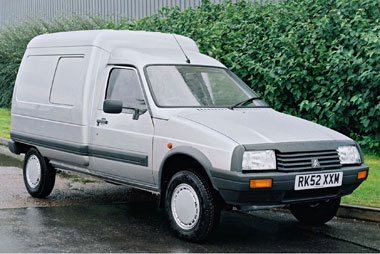 Arms
Esteemed
No tracker?
Huh!
No alloys!
Shame on you!
LOL!
T

My old man had one of those but in red

My old man had one of those but in red
Click to expand...

Bulletproof engine and great on fuel, and good in the snow.

Mentor
Arms
Esteemed
I used to have to wrestle one of these pigs around the roads ....

When the firm scrapped the two they had I bought one for a quid as I had no run around at the time. Sold it for £250 to a plumber who promptly wrote it off. So soon after purchasing it from me that the insurers rang me about the crash instead.
D

Does it make the tea?

Arms
Esteemed
Advent Win
The company I worked for as an apprentice had a few Citroen’s, I think C15 but might have been earlier model. Very curved windscreen and only one wiper?

Their older fleet was maestros. Ex British telecom. Painted white on the outside with company’s livery, but still old BT yellow on the inside.

Another employment, I worked at times on an RAF base. They were strict about not having trackers on contractors vans because they could affect the sensitive electronics around the place.
The missile section was particularly strict.

“This is your emergency fire training induction training for working on or near the Missile Section: On discovering a fire.... RUN!!!!”