So far I'm struggling to identify the cable in use here. I've attached a photo, could someone point me in the right direction of a wiring reference guide so I can attach a standard telephone socket for broadband? 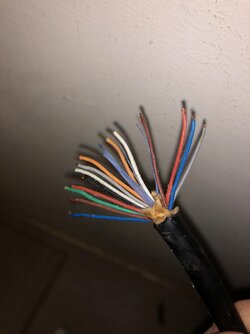 Arms
Do you have a d.c. voltmeter?

Arms
Esteemed
looking at the number of tails for the bt ,it would be advisable to get in open reach ,looking at the amount of colours on that cable it could be any .
B

Charlie_ said:
Do you have a d.c. voltmeter?
Click to expand...

I mean, I could get one?

You will need a meter as said before to identify/confirm the correct pair.

Mentor
Arms
Esteemed
The cable is not a standard telephone cable, they are usually laid up in pairs, so it has been used outside of its normal area, therefore any core could have been used for the telephone service.
Your best bet would be to find the other end of the cable and see which cores have been used to connect to the telephone system and use those for your connection.
Checking voltage to find the 0V and -50V might be a bit random if any cores have been cross connected or used for other purposes at the opposite end.

That is a very odd cable, appears to be no tracer marks on one of each of the colours. Is there a second green wire and a second black wire we can't see in the picture. I.E. it's an "8 pair" cable, two of each colour?

Both the blues ought to be the first pair, but it's up to whoever installed it to choose which pair they were going to use. As said, the pairs don't seem twisted, so look forward to crappy broadband speed! The order of the colour code for the pairs is...

Everything up to and including the master socket is the property of Open Reach and you are not allowed to touch it.
J

GeorgeCooke said:
Everything up to and including the master socket is the property of Open Reach and you are not allowed to touch it.
Click to expand...

Not even just brush it lightly with your hand?

Jim_e_Jib said:
Not even just brush it lightly with your hand?
Click to expand...

Do you have a phone socket fetish??

Spoon said:
Do you have a phone socket fetish??
Click to expand...

Spoon said:
Do you have a phone socket fetish??
Click to expand...

Well, those NTE5 Master sockets are excitingly domineering to a lowly Slave...
4

This looks to be a 20pair solid colour cable. It will be used for major telephone installations. Unlike modern twin coloured paired cables, the installer creates circuits using different combinations of paired cables, e.g. red with white, red with green, etc, etc. This gives a considerable number of possibly circuit combinations. I doubt they will be good for broadband. Depending on how/what you are wiring, you need either a 2 pair or a four pair cable. Colours do not matter except that the ones used for the telephone line (connected to A and B) need to be the same ones used for the telephone in the socket. The ADSL/VDSL colours also do not matter as long as again they are matched into the correct terminal at each end.
4

Reply to Cut Telephone cable: need to rewire in the DIY Electrical Forum area at ElectriciansForums.net