This official sponsor may provide discounts for members
You are using an out of date browser. It may not display this or other websites correctly.
You should upgrade or use an alternative browser.

UK Is this ok to extend a ring main?

Discuss Is this ok to extend a ring main? in the Electrical Forum area at ElectriciansForums.net

I have had a new boiler fitted yesterday but the supply to the boiler has moved. The boiler is currently on a normal 3 pin plug plugged into a socket. What I want to do is have it wired into a fused spur. But in the future I want to run armoured cable to my shed off another fused spur on the same ring main as getting to the fuse board is nigh impossible.

Can someone tell me if this is correct in what I'm thinking to extent the ring main. 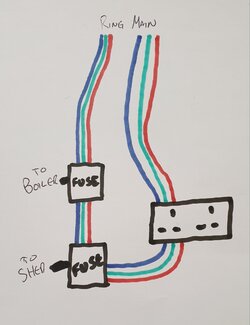 Yes, that is basically right.

Feeding the shed via a 13A FCU is perfectly OK providing that is enough for anything you need out there (e.g. couple of double 13A sockets for garden tools or the like). As it is most likely used outdoors, that circuit must be RCD protected, but probably your ring final already is.

For any lights in the shed use another FCU with a 3A fuse to switch and protect the cable, fitting, etc.

It's probably a good idea to have an isolation switch (double poled) for the shed as well a as fuse. Makes it easier to isolate there's a problem.
P

Generally I use the MK Logic Plus range, they seem to be double-pole switching.

But never the "MK essentials" as they are rubbish!

I'd avoid the cheap FCUs as the terminal layout can be confusing and fiddly to terminate. Whether you are going surface box or back box, 35mm will make things a lot easier in terms of space for a ring and a feed out.

For future reference, you likely won't want to run armoured cable directly to a fused spur, but via a separate adaptable box with room for the gland to be made correctly to ensure the armour is earthed (though I would always suggest using 3 core armour too)

(You could in theory gland SWA directly to a plastic back box, but it's likely to be an exercise in frustration without experience)

As always when breaking into a ring, you will want to ensure that you maintain continuity of each conductor and ideally have some way of testing that.

Reply to Is this ok to extend a ring main? in the Electrical Forum area at ElectriciansForums.net