Hi,
first time poster here, been on the plumbers forum for years but have a question about an alarm box that I need a pro to help with
Got home yesterday and the alarm was going off, I hadn't armed it, got in and the tamper light was flashing, so reset the alarm, and the panel stopped sounding, but the box outside carried on sounding, I bridged the tamper terminal which turned the light off but outside still sounding, I turned the breaker off at the consumer unit for the alarm and disconnected the battery but the outside box carried on screaming until about 10pm.
Was speaking to someone about it this morning who said their old alarm used to play up like that in very hot weather.
Got home at lunch time, alarm was fine, as the temperature outside got to 30deg about 2pm my alarm went off again and again nothing would stop it, so turned off at mains, disconnected battery and got up a ladder and had to cut through the old box to open it as the screw had totally rusted up. Opened it up and cut the wire to the siren, that did the trick.
Got a replacement o/s box from a local alarms shop, they sold me a Texecom X-BE and said it was compatible.
The wiring had me scratching my head for a bit as there were no manuals with the box and no resources from the texecom website unless you're a registered installer.
There's also 3 jumpers on the new boxes PCB that I have left as they were when I got it.
There's 6 wires going from the panel to the new box, I noted where they were on the old box and have connected them up to the new box, but I'm far from confident.
They're wired as follows:

There are 7 terminals in the new box, ABCD and S and 2 others for the microswitch that senses when the case has been opened marked MSW.

I restored the power to the alarm and reconnected the battery, panel looked happy, no tamper lights or flashing etc.
Went to the new bell box and the 2 white LEDs at the bottom were slowly flashing alternately and the front was lit up.
Opened the cover to activate the tamper and the siren sounded, (really loud when you're next to it) but no strobe.
Put it all back together and armed the house alarm and then purposely set it off by setting off a PIR, the rascal panel alarm went off but the outside bell box didn't.
At that point I disconnected the battery in the rascal and turned it off at the mains again.
I suppose my question is (finally) - have I wired it right and are the jumpers in the correct positions?

Mentor
Arms
Esteemed
pics of the connections in the panel and in the outside siren needed.
U 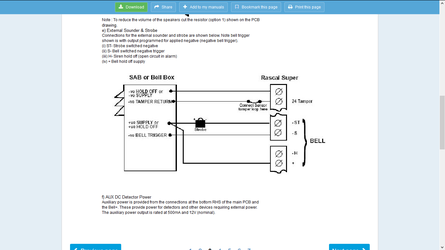 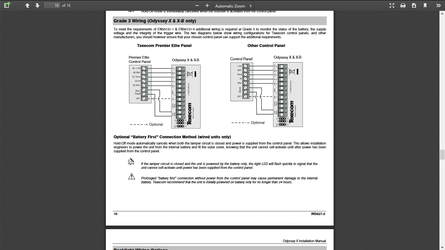 Are these any help!!
J

telectrix said:
pics of the connections in the panel and in the outside siren needed.
Click to expand...

Here's the panel pic, marked the wires that go to the siren with their terminal letters. Will get a pic of siren connections shortly.

It's hidden in the pic but the first two terminals are TMP 24 and are currently looped out with the black wire.
Last edited: Jun 30, 2019
J

telectrix said:
pics of the connections in the panel and in the outside siren needed.
Click to expand...

And here's the siren. 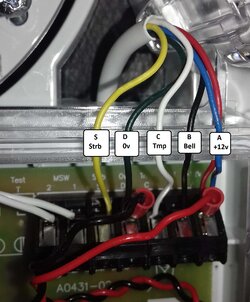 They are, thanks. Still not sure though on my wires providing the negative permanent through the tamper loop, is that common practice? Thinking about it, it must be working because the alarm sounded when I opened the cover of the siren when the battery jumper was in the 'off' position.

Mentor
Arms
Esteemed
in the panel should be a wire in H- to go to 0V in siren. and why are there 2 blacks in siren? there should only be 1 red in H+.
J

telectrix said:
in the panel should be a wire in H- to go to 0V in siren. and why are there 2 blacks in siren? there should only be 1 red in H+.
Click to expand...

In the panel there's a BELL section that has three terminals, labelled '- S', '- H' and '+' is the H- you mention the second one of the bell terminals?
There's only one black wire in the wires coming from the panel to the bell box, wire 'D' above is dark green and looks like black.

Just tested the alarm and the bell box doesn't sound when alarm triggered.
I opened the user panel and the lid tamper turns the bell box siren on and off, i.e. when the lid is open the alarm outside sounds even after I have reset the panel.
Tamper is also flashing on the user panel

Mentor
Arms
Esteemed
OK, so in the panel you have H+, this goes to A in the sired. H- goes to D, -S goes to B, st goes to S, and finally, C from siren is a tamper return for which i can't see a terminal for in the panel.might need to go into the tamper loop of the detectors.
J

Mentor
Arms
Esteemed
sorry. in panel it's not H+ it's just +.
J

Leesparkykent said:
Have you exited engineers?
Click to expand...

Hi, I think so, is that the battery first thing where you power up with the box lid open then close it and 2 minutes later the LEDs flash slowly and alternating?
I've just done a continuity test on the wires and 2 of them are broken somewhere, carpet up time now to find what the carpet fitters did... today isn't going well
J

Just to update,
I found out that there were two broken wires where the carpet fitters cut through the cable a couple of years ago, they were the bell activate wire and the strobe wire. I have repaired them and it now all works with the wires connected as I originally had them.
I'm guessing that's where experience comes in, someone who knew what they were doing would have done a continuity test on the wires at the beginning
Thanks a million for your help and just incase it's ever needed here's a pic showing the wiring I used, you never know someone else may have issues connecting a Rascal + to a Texecom Odyssey bell box. 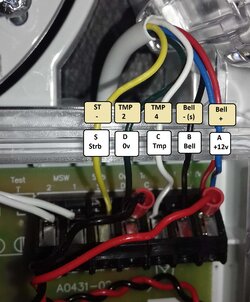 Its a very basic old alarm panel, its from the era when the bell tamper is shared with the global, tamper & case tamper. (negtive loop)

around 30 yrs ago sounders started to become complete items rather than purchased as an enclosure, bell module, horn, strobe ect

If an the external sounder fitted a by proper installer its should be unaffected by heat, cold, rain, wind ect... nor should an alarm be effected by power failure, well not for a good 8 hrs
You must log in or register to reply here.