Even without the potential for dying a horrible death alone.....I’ve never understood it

Arms
Esteemed
A live broadcast from there showed lots of assumed barbecue smoke wafting all over the beach and blasting music, "why would you"

Mentor
Arms
Esteemed
why go to the beach when it's pi$$ing down.... all them umbrellas.

Mentor
Arms
Supporter
Esteemed
As a man, I used to think I was pretty much just a regular person, but I was born white, into a two-parent household which now, whether I like it or not, makes me "Privileged", a racist & responsible for slavery.

I am a fiscal & moral conservative, which by today's standards, makes me a fascist because I plan, budget & support myself and my family.

I went to Secondary School & have always held a job. I now find out that I am not here because I earned it, but because I was "advantaged”.

I am heterosexual, which now makes me a homophobe. I am not a Muslim, which now labels me as an infidel.

I think & I reason, and I doubt much of what "mainstream" media tells me, which makes me a "Right-wing conspiracy nut”.

I am proud of my heritage & our inclusive British culture, making me a xenophobe.

I believe in hard work, fair play, & fair compensation according to each individual's merits, which today makes me an anti-socialist.

I believe our system guarantees freedom of effort - not freedom of outcome or subsidies which makes me a borderline sociopath.

I believe in the defence & protection of Great Britain for & by all citizens, now making me a militant.

I am proud of our flag, what it stands for and the many who died to let it fly, so I must be an imperialist and a racist.

Please help me come to terms with the new me because I'm just not sure who I am anymore!

If all this nonsense wasn't enough to deal with, now I don't even know which fecking toilet to use !!

Arms
Supporter
Esteemed
But deep for this time of day @richy3333......absolutely spot on though......over 40 white males are most definitely the cause of all the worlds problems

Your an ocean compared to me then mate

Arms
Esteemed
Looking back on my pic of Bournemouth beach....
Why is that so terrible, when it’s alright for half of Liverpool to party in the street?

littlespark said:
Looking back on my pic of Bournemouth beach....
Why is that so terrible, when it’s alright for half of Liverpool to party in the street?
Click to expand...

The Liverpool thing is shameful. They were even firing rockets at buildings, which is probably what caused the fire in the Liver building. Dicks.

Arms
Esteemed
So, the first shops and services to reopen will be opticians, chemists and Greggs.... 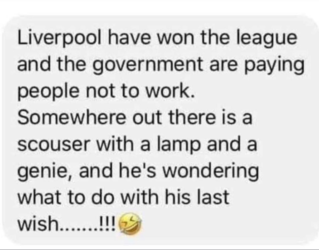 Mentor
Arms
Esteemed
stringing up a pirate at the yardarm would be my last wish.

Arms
Esteemed
You are out of luck there, Tel...I keep my yardarm fixed flat to the deck...
no-one can string me up on it, and...
the sun's always over it!

Mentor
Arms
Esteemed
have to make you walk the plank in diane abbott infested waters then.

Arms
Esteemed
Oh no! PLEASE! not that! Please! Anything else is fine, but not THAT, I BEG you!
Sharks I can handle...

Arms
Esteemed
Why is there a difference between the two options.

Arms
Esteemed
One is fat and ugly and death would be long and lingering and painful...

the other is a shark

telectrix said:
have to make you walk the plank in diane abbott infested waters then.
Click to expand...

Reply to Coronavirus - Keeping it light :-) in the COViD-19 / Coronavirus Community Help Forum area at ElectriciansForums.net