Discuss LED FLASHING in the Electrical Forum area at ElectriciansForums.net

Original lamps were all Ledlite bought from TLC controlled by Knightsbridge dimmer switch, after they had been on for a while the lamps would flash but not all together but randomly (think of Xmas tree lights).

Replaced dimmer switch with Click Scolmore which would produce a very slight flicker at certain dimming points and here is the really strange thing, it would also cause the bedroom lights to flicker randomly, but when the SR lights were turned off then the bedroom lights behaved properly.

Today I went back and changed the bedroom lamps for Bell and I’m now waiting for the dreaded phone call from the client.

If this doesn’t cure the problem I’m unsure what to do next.

Has anyone ever experienced this and if so how did they achieve a satisfactory cure?

I have come across similar - a compatibility problem between lamps and dimmer causing LED lights in adjacent rooms to flicker. I can't explain why it happened but it did.

IIRC one time I installed a dimmer for an ensuite light, but left the CFL lamp in. Power on and the CFL is flickering as expected, but also the LED lamp in the bedroom is flickering too. Changed the CFL to dimmable LED and all was well.

The Varilight V-Pro are my preferred dimmers, as above you can change modes to deal with compatibility problems.
P

Just joined and not a sparky but on browsing saw your post and recalled seeing this when I bought a 'touch light switch'. May explain it and worth a read - LED Adapter

Dimmers can cause all sorts of interference problems because of their appalling power factor, high speed switching and harmonics. I know it's easier said than done but try to stick to known compatible dimmers on the same lighting final circuit. If you've got issues where one dimmer is causing flickering in another dimmer on the same circuit you could try stealing a suppression filter out of an old washing machine or microwave an install it somewhere near the dimmer that's suffering interference. 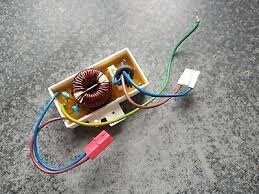 Dimmers and led drivers use the same technology, a circuit known as a buck converter.

Basically you feed a square wave into a capacitor - inductor circuit, as you vary the pulse width the average voltage varies. If you use a high enough frequency the voltage increases as the capacitor charges, but then gets cut off before it goes too big, by doing this you get an average of say 100V - with peaks and lows of 102V and 98V. (If you used a lower frequency you may still have an average of 100V, but with 150V and 50V peaks and lows!!)

The problem is that each device uses different frequencies, the dimmer may be 28kHz, whilst the driver in a led lamp may be 35kHz - these could interact as the 5th harmonic of 28 is 140kHz and the 4th harmonic of 35 is also 140kHz, so these harmonics add or subtract causing either additional brightening or dipping of the led - we see this as flicker.

We don't know what the frequencies are, or the harmonics, as each lamp/driver/dimmer is different.

Either keep trying for compatible devices, or add suppression.

The easiest is small capacitors local to the devices - you could also try one or two capacitors from fluorescent fittings, but this isn't anything like as effective.

You can buy expensive suppression modules - but they are just a simple capacitors of between 0.22uF and 0.01uF rated for 350Vac wrapped up in a fancy package.

One small one at each device is better than one big one somewhere on the lighting circuit.

I'v successfully used these: https://cpc.farnell.com/evox-rifa/p...PKjh6IIPiV6Tj7wt6qnAiM9w4fb3GVIUaAjC6EALw_wcB and they fit into a Wago lightbox.

I am not keen on dimming leds as even when using dimmers recommended by lamp manufacturers they don't always work. I tend to use v Pro dimmers as I've had the least issues with them

Matthewd29 said:
I am not keen on dimming leds as even when using dimmers recommended by lamp manufacturers they don't always work. I tend to use v Pro dimmers as I've had the least issues with them
Click to expand...

just had to replace a v-pro dimmer fitted 6 years ago. downlights randomly going on and off when switched on/. shorted the strappers back of dimmer, all work OK. new 2 way switch fitted as client can dim lights with phone app..... dimmer switches, i hate them/.
P

Also these, have stranded flex so can be a bit easier to fit, but not quite as low an impedance as the ones mentioned by @Mike Johnson abvoe:
https://cpc.farnell.com/ampohm-woun...-100/contact-suppressor-0-1uf-100r/dp/FT00715

The ones I linked too are an easy fit into a Wago lighting box as they are the exact width of the box and the single cores are spaced at the width of a Wago lighting connector, I will pull one down from the ceiling later and post a pic.

As mentioned above, the key reason for one dimmed light interacting with another is due to distortion of the mains voltage waveform. Normal 'phase-angle control' dimmers work by chopping off part of each mains half-cycle to reduce the average voltage. This worked well for filament lamps that are approximately resistive and have a light output that depends on the voltage, but LED drivers (including the driver circuit built into all-in-one mains voltage LED lamps) don't work like that and the whole concept of phase-angle control is rather inappropriate for them and is a bit of a fudge for backward compatibility.

Traditional leading-edge dimmers work by firing a triac into conduction part-way through the half-cycle, trailing edge work by cutting off part-way through. Both generate significant harmonic current, much more so when presented with the non-linear load of an LED instead of a filament lamp. When the distorted load current created by one dimmer and lamp flows through the impedance of the circuit, it distorts the voltage waveform seen by other dimmers on that circuit away from a constant sine wave. The higher the L-N loop impedance, the greater the distortion. The other dimmers watching the voltage and waiting to switch their power device at the right moment then respond early or late because the voltage is not following the expected curve. The LED load current can also vary in ways not directly controlled on a cycle-by-cycle basis by the dimmer conduction angle, e.g. due to the state of charge of internal capacitors and the PWM output waveform. These various time constants can come into play in creating interaction between one dimmer and another, creating flicker at visible frequencies.

Shunting the line and neutral locally with capacitors diverts the high-order harmonics and switching noise away from the circuit conductors. The currents still flow through the dimmers but not through the loop impedance / cable resistance common to the other lights, so it doesn't create the same level of voltage waveform distortion, so has less disturbing effect on other dimmers.
Last edited: Nov 22, 2020
C

I know this isn’t any help at all but this is the reason I avoid dimmers like the plague.

Tight fit, but it works

CEDevonSpark1 said:
I know this isn’t any help at all but this is the reason I avoid dimmers like the plague.
Click to expand...

agree with that I try everything to avoid them!

Looked at the title and, for a minute, I thought we had some roofers on board.....LEAD FLASHING?...?

I thought that as well, but thought better not to show how badly I need new glasses, or that I don't know how to spell Lead. ?

Me too, I though someone was going to ask if it needed bonding.

ruston said:
Me too, I though someone was going to ask if it needed bonding.
Click to expand...

Get yer blow torch out, that'll sort it.

Reply to LED FLASHING in the Electrical Forum area at ElectriciansForums.net

S
One Way Switch Issue. Help!
Hi all, I'm hoping someone on here can shed some light on an issue I currently have with a bedroom light switch. Yesterday evening, I attempted...

G
LED Light Socket Dimmer switches?
I have some really nice vintage type LED bulbs on some dimmer sockets I installed on several of my lights. The problem is they flicker, switch on...

A
DIY I replaced my light switch and only one light is flickering
Before replacing anything I had already been having issues with my light bulbs. Even after installing brand new ones the lights would start...

LED not dimming full range
I replaced a ceiling fan with one with a LED light. The switch is a Lutron MACL-LFQH light/fan dimmer switch and the fan has a Lutron CM-L300FQ1...

Add a double dimer switch to an existing installation
Hi, Would like some advice please on the following issue. 2 (dimmable)wall lights which are plugged into a mains socket via a 5 amp fused plug...