Discuss design software in the Electrical Wiring, Theories and Regulations area at ElectriciansForums.net

I'm an experienced electrician who has recently passed the written exam of the level 4 NVQ design course. I still need to complete the design portfolio but this is not what I'm here for.

I'm looking for some good software that is free if possible but not essential to use to design and present electrical circuits to both client and an electrician responsible for installation.

As you might appreciate this is a new area for me and although I'm familiar with what I can visualise as an end result I'm unsure what software might be best to use to create these drawings, diagrams and schedules.

I have downloaded Electrical OM but this looks like it is more for schematic drawings and more technical circuits. I'm looking for more of something like Smartdraw for building layouts and distribution board schedules etc. Smartdraw looks great but isn't free.

Whar are peoples opinions of Smartdraw and similar software like AutoCad and Electrical OM??

Arms
Esteemed
I'm sure @MODECSOFT, one of our esteemed sponsors will be able to help you when they arrive until then someone posted a tread for 'Jaysoft cable mate' which has a free 5 day trial for windows based computers, it may be what you are looking for.
R

Maybe try one of the freebie CAD packages like QCAD or LibreCad.
T

If you want to do things manually you can use a generic CAD software. If you want automated and/or manual design and calculations for sizing cables etc then ElectricalOM can do the job. If the only thing you need is to calculate cable sizes, then the other tools, suggested by the other members, can also be an option for you.

We are pretty sure that ElectricalOM can do what you are asking with using the plan design addon. If you want, we can arrange a quick presentation to show you more details. 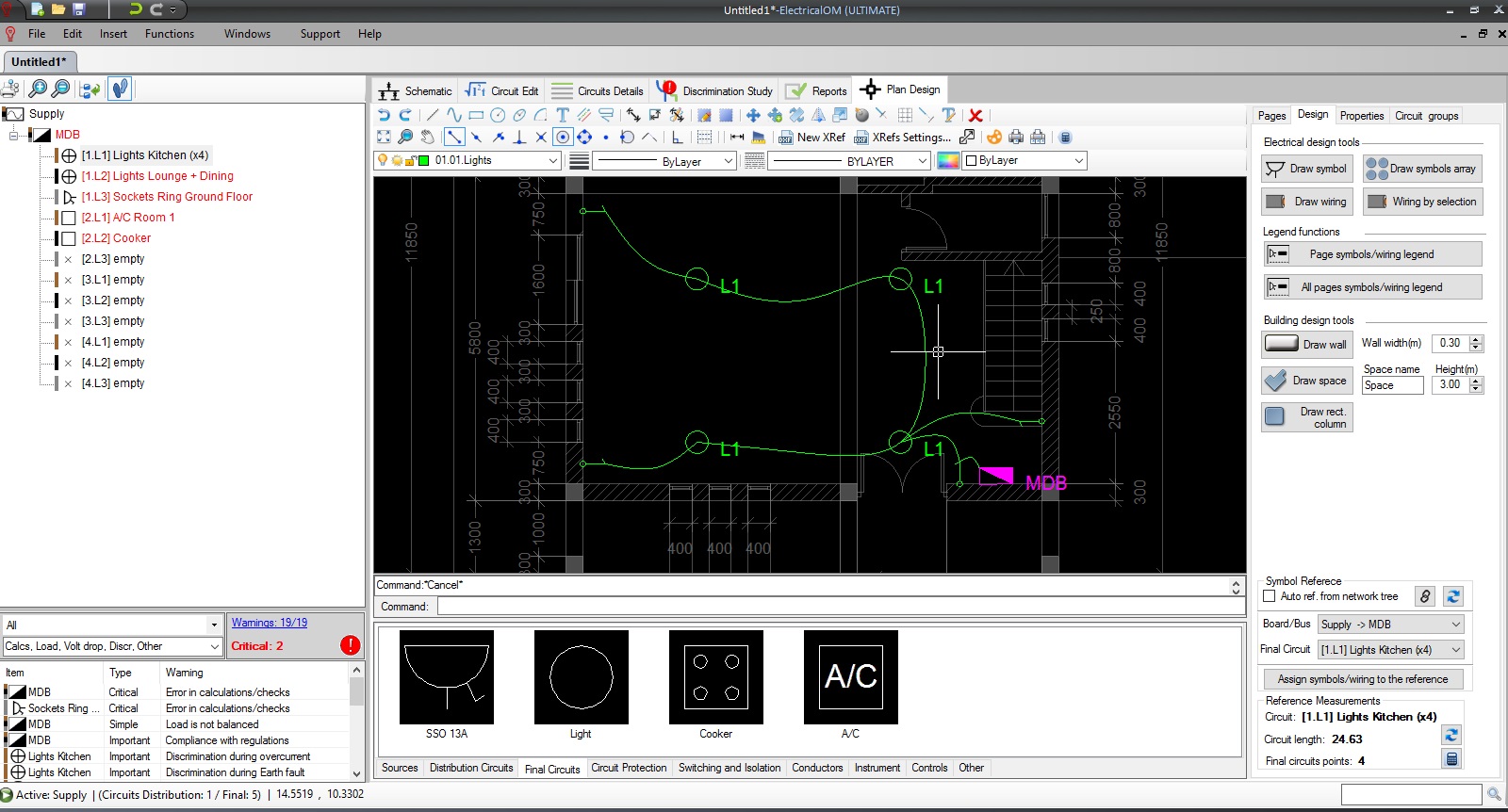 Mod
Mentor
Arms
Esteemed
I can't offer well rounded opinions on much else as I've not used them for long enough, but SmartDraw I've used extensively.

It has loads of symbols, but many are geared toward America. The board layout symbols for example are all American. There is nothing stopping you creating your own symbols to closely match the style of devices we have here, but you'd have quite a bit of donkey work to do before it became useful.

I used to love SmartDraw, but as with so many other bits of software these days, it's been dumbed down and it seems to make so many decisions for you about line connections and grid snapping that sometimes getting the layout you want is just a complete faff, and try as I might I couldn't find anyway of stopping this 'smart' behaviour. I've just tried to create a board layout using their symbols... the board snaps into place and then you start placing breakers, GFCIs and AFCIs and they are snapping all over the place except where they should go to make the layout look professional.

The obvious advantage of using something like ElectricalOM is it's design validation capabilities (which seem great BTW, except when you maybe want to add a spur to a ring final... anyway to do that @MODECSOFT ?), and that's really the part you're going to be paying for (that and the effort required to link it so closely to the regs).

SparkyChick said:
except when you maybe want to add a spur to a ring final... anyway to do that @MODECSOFT ?), and that's really the part you're going to be paying for (that and the effort required to link it so closely to the regs).
Click to expand...

Would be interesting if this software could do that. I too have found this limited in other design software.

Official Sponsor
@SparkyChick Currently we don't support spur to socket circuits. This is something we are going to include in a future release. If there is something else you would like to have please let me know in order to start looking at it.
Thanks

Mod
Mentor
Arms
Esteemed
Seriously though, I can't think of anything at the moment, but I haven't used properly. I've just played around with it.

Well, at the moment we offer the software at a discount price and by using the extra 25% discount code offered to the forum members, you will get the software with more than 50% discount!
S

Official Sponsor
@Swcfisher
Hi,
You can define the isolator at the incomer protection tab page at the circuit editor of a distribution circuit. Also you can drag-drop isolator/switch disconnector symbol with relevant description anywhere in the schematic from the schematic properties area at the symbols tab. You can also check the getting started tutorial help.electricalom.com

If you can be more specific about the other problems I might help you with your design. What exactly are you trying to implement?

Thanks for all the brilliant comments. I'll take a better look at ElectricalOM and look for some tutorials for it too. I liked the simplicity of SmartDraw but when I learnt it was American I thought there would be a clash with practicalities.

Reply to design software in the Electrical Wiring, Theories and Regulations area at ElectriciansForums.net