Discuss Unusual Sockets found on rewire in the Electrical Forum area at ElectriciansForums.net

Hi, i have been doing a bungalow rewire with a colleague, and came across these installed in lounge and bedrooms.
has anyone seen these MEM sockets before ? approx age ? 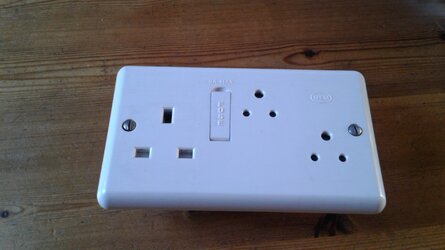 This official sponsor may provide discounts for members
O

They were known as 'fireside' sockets at the time, and as above, late 50's to early 60's I think. That particular one looks in great condition, what was feeding it? Rubber or PVC?

The electrical nerd inside me wouldn’t be throwing that in the skip ....

Arms
Esteemed
Before my time so bear with me.
Would that be standard socket on the left handside then the fuse to protect the round pin outlets on the right, say via a 5 or 3 amp fuse?

Arms
Esteemed
Is that around the introductionof the square pins, so you had sockets that took old and new for a while?
Cool bit of kit, anyway. I remember my parents house had the old 15A and 5A round pin sockets, on the skirting boards.
D

That looks brand new, last time I saw such a thing it was old and yellow! And I was just 7 years old. It was at home, for whatever reason my Dad had some Christmas lights with a matching plug - I guess the position of the socket dictated where he put the tree!

That socket plate must be at least 60 years old and it looks like it was made yesterday. Keep it until you retire and you will have an a-grade condition antique!

Arms
Supporter
Esteemed
I too have never seen one of these in such good condition! The last one I removed had a crack right across it and was rather yellowed.

Mentor
Arms
Esteemed
I hope i live long enough,to see you queuing in the hot sun with that in a box,so some toff can appraise it,and we can watch you at Sunday teatime

Mentor
Arms
Esteemed
That's the version of the 'Fireside Socket' that fits a standard 2g box. The original had a non-standard square footprint and was sold under the 'New Day' brand, the owner of which had a patent on the swing-out fuseholder that was inherently touch-proof.

Would that be standard socket on the left handside then the fuse to protect the round pin outlets on the right, say via a 5 or 3 amp fuse?
Click to expand...

Yes. They are 2A sockets, which would normally be fused at 5A at the CU for fault protection only. So a 5A fuse would be fitted in the fireside socket instead.

Is that around the introduction of the square pins, so you had sockets that took old and new for a while?
Click to expand...

It was actually a bit later, although round-pin sockets remained in widespread use for decades after the 1947 introduction of the 13A. There had been six different round pin sizes as they tended to be matched to the application, because appliances didn't move around as much in those days. If you had a 5A 3-pin socket for the standard lamp and a 2A 2-pin for the radio, it didn't matter if the radio always sat on the sideboard and the standard lamp always stood by the armchair.

The idea of the Fireside socket was to feed an electric heater and two small appliances such as a standard lamp and a radio. Triple unfused points were never permitted, so it gave you an extra point in the same space without any more wiring. Of course, it totally defeated the idea of all plugs being interchangeable in all sockets, which we have come to expect but was rather a novelty then. I think it was more of a solution to a problem that didn't exist.

If you have any spare of those, I would be very interested in an example or two for the museum. We have two of the square ones in mint unused condition, IIRC one badged 'New Day' and one with the name ground out of the mould, but not the 2G one badged MEM. 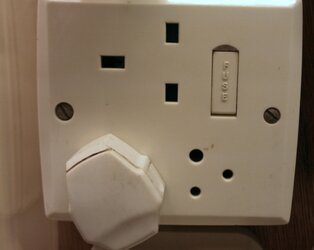 Mentor
Arms
Esteemed
Talking interchangeable, l presume someone used to have a lead with one of those multi plugs..... you altered the pins to suit the socket. They did 13 amp, 5 amp and 15 amp round pin. I might still have one knocking around, although I can’t remember seeing it for a while.
S

Some people still use the round pin style sockets to switch lamps on in a room from the main lighting with as you walk in to a room.

SWD said:
Some people still use the round pin style sockets to switch lamps on in a room from the main lighting with as you walk in to a room.
Click to expand...

Yes it is still the standard for dimmer outlets in theatres etc but there is a gradual change to 16A outlets happening for new installations.

Aye, and all wired in vir, just like the domestic stuff in question, I suppose.
P

The sockets were in the bedrooms as well as the lounge, all wired in pvc with stranded conductors (even the earth were three strands).

@Lucien Nunes , if you pm me your address i have found a couple more, and i will send them to you.

all wired in pvc with stranded conductors (even the earth were three strands).
Click to expand...

PM sent to Phil... at least with these 2G ones I don't have to ask whether the back boxes can be salvaged.

Mentor
Arms
Esteemed
Follow-up: Big thumbs-up to Phil, who sent over two of these in undamaged condition ideal for display, and one of the 4-gang 2A sockets (unfused, for a 5A circuit) with the same footprint as the original Fireside socket. One of them has the original blue 3A MEM-branded fuse in, too. I'll see if I can fish out the original New Era version and take some pics of them together.

Where is this museum?
B

SWD said:
Some people still use the round pin style sockets to switch lamps on in a room from the main lighting with as you walk in to a room.
Click to expand...

Hotels is where I’ve seen that on a number of occasions recently. I assume it’s to stop guests unplugging the lamps and plugging 3kW heaters that they’ve brought with them in to the lighting circuit (you know there’s someone out there that will do it).

anthonybragg said:
Where is this museum?
Click to expand...

Mentor
Arms
Esteemed
Ha ha, would have to widen the doors a bit to get some of the exhibits in.
The museum is not open yet. While we are working to form the trust to operate it, the stuff is in storage. I have been looking at some possible permanent sites but there is a lot to do to organise that. We narrowly missed one earlier in the year, someone else made a better offer. It's quite a challenge, finding a location large enough, accessible for visitors, preferably not too far from our existing storage (there's about 20 artic lorry loads to move) and ideally capable of future expansion. And affordable out of my pocket money!

Arms
Supporter
Esteemed
Looking through some old work photos and found this: 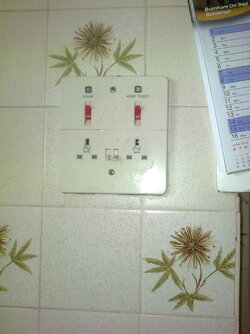 And also in the same house, this: 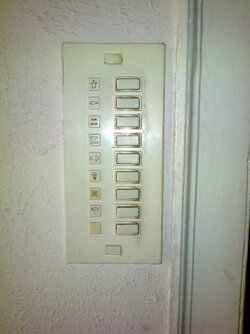 No idea what half of the symbols were supposed to represent.
All wired in rubber cables fed from a mix of MEM Kantark and Bill Insulok fuseboxes.
T

We used to have Nettle switches and sockets in our house re 1972/3 what happened to them? looks like they did some interesting combinations.

Mentor
Arms
Esteemed
Two unusual items there. The Nettle cooker control I've seen, although I'd love to find an example. I can't recall how many sets of input terminals it has, e.g. whether the socket outlets are independent. I think the BS specifies a single socket only when fed from the cooker circuit, so I suspect they are.

The multiway / grid switch I think is imported. The switch modules look Italian, possibly Bticino. I wonder whether this was in a house owned by an 'enthusiast' who specified unusual fittings? Again, the sort of thing I'm always on the lookout for.

Nettle - Started in the 20s as Victor Iddon, taken over by Aerialite, Nettle brand launched in 1950s, taken over by Delta, merged with MEM and the brand discontinued, although technically now part of Eaton.
Last edited: Dec 8, 2018

Arms
Supporter
Esteemed
IIRC the nettle switch had 3 separate supplies, I couldn't resist taking a look, as the house was unoccupied. The switch was Italian but I don't remember the manufacturer. It was the only one of that type that I could see. The sideways switches were horrible to operate. It was a while back, photo says 2012.
S

Lucien Nunes said:
The museum is not open yet.
Click to expand...

Hell's bells Lucien, I was asking you about this about five years ago!
Can't be easy I guess, especially in London. Don't forget, let us all know when we'll be invited down for the opening day

Reply to Unusual Sockets found on rewire in the Electrical Forum area at ElectriciansForums.net