Discuss BANG! in the Electrical Forum area at ElectriciansForums.net 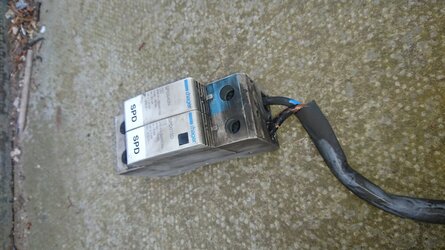 Sparks and flame from cu.

By the time I got around there, the main fuse had gone, most damage to the spd, but full of arc residue on the rcbos around it.

Managed to save most of the board, but need new rcbo x 4 and the spd itself - at least I think it's not well!

Got most of it sorted in time, spen just round and replaced fuse, so some circuits back up now.

Rushed home to check my spd - all fine, so assume we are on different phases.

Arms
Esteemed
I’d rather not have one of them in my CU if that’s how they work??

was this one faulty?

Arms
Esteemed
Is it clear as to what happened? Does it mean that there is some inherent danger in SPD?
J

littlespark said:
I’d rather not have one of them in my CU if that’s how they work??

Mentor
So the point is S.P.D is to protect the installation and the property from supply overvoltage that may cause damage and or fires.

I think where an S.P.D is fitted it needs to be within a fireproof enclosure, not just a metallic one and it also needs another device in circuit, as yet to be named, designed to protect the S.P.D. which may also have to be contained.

Given that relatively few will have been fitted, if that's the only one that's failed, which I doubt then thats a very high failure rate.

I think Hager may be interested in that one.

Arms
Esteemed
Bloody hell is a hagger spud has well so remind me not to one of those ones in, any way was the cheeses and beans done has well. Lol
P

I think it is important to get a proper investigation in to this to see if it was a manufacturing defect in this one device or the result of a sustained over-voltage.
J

Arms
Esteemed
Just been to collect and fit the RCBOs, and I am not sure I have been given the full story!

I stripped it down somewhat more, and there is a sticky substance all over the wires and parts of the internals - I assume something has been spilt from the shelf above recently - now I have been able to see it in the light of day!

Very soapy - the more I wash my hands the more soap suds I get!

Couldn't get a new SPD so I have them back up and running now, and told them to get an electrician in now there's no urgency, much prefer keeping warm in an office rather than being called out at stupid time!


I usually specify Hager, and actually have the same in my house, but never had any reports of this before, although I note the design has changed slightly - the window in this one (and at home) is a tiny square to the right, the new ones appear to have a much bigger window (from the photos on-line)
P

Arms
Esteemed
Doh! Of course we assumed this was an isolated electrical fault and not the result of pouring gloop over the thing!

Should have though given the number of photos of CUs we see on there forums with bottles of stuff stored on top...
J

Arms
Esteemed
Well it just gets better the more I look. 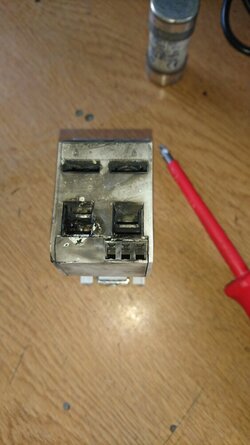 Better tell them not to use the same electrician that did their cu change!

Arms
Esteemed
Have they got kids? I bet it was bubble blowing mixture, top not screwed on right.

(personal experience, but not anywhere near the CU)

Arms
Esteemed
There're not in at the moment, but will ask - don't want to get too tied into it as you just end up doing all their jobs and I don't actually install any more except for special occasions.

It worries me though, I think they paid big money for this job, and yet the guy couldn't even get the cable in correctly - I thought it had just burnt away - but as the second photo shows, the burnt cable wasn't actually tightened - the clamp is fully closed - with no remnants of cable left - so basically he pushed the cable end in behind the clamp!

then I assumed he tightened the clamp - missing the wire completely - must be 2-3 years ago!

Mentor
That's not that uncommon with the clamp.
I used to do Commercial and have found many cables not in clamps over the years, most with no ill effects.
The problem is caused by assuming the clamp is fully open when new and not opening the clamp fully before inserting the cable.
However it should always fail the Tug test.

Julie. said:
Couldn't get a new SPD so I have them back up and running now, and told them to get an electrician in now there's no urgency, much prefer keeping warm in an office rather than being called out at stupid time!
Click to expand...

what is your part time work getting up the crack of dawn a milkman part time spark ,while I'm hear puts some toast on .lol.
J

buzzlightyear said:
what is your part time work getting up the crack of dawn a milkman part time spark ,while I'm hear puts some toast on .lol.
Click to expand...

Sure, just buttered, or do you want Jam on it?

Arms
Esteemed
So much of that spud going down was it a lighting strick or a spike from the grid and have you told the local DNO.
D

Looks like someone took a blow torch to it...

Arms
Esteemed
I've seen a few SPDs that have operated due to surges, mainly atmospheric. None have looked like that.

As you have indicated it looks like a combination of poor installation and external 'gloop' causing the flash over.

I would be tempted to inform the DNO as a precaution to see if they have any record of surges and possibly send the SPD back to the manufacturer for analysis.

another device in circuit, as yet to be named, designed to protect the S.P.D
Click to expand...

Arms
Esteemed
That bit has bothered me about the Hager (and some others), the connection is directly to the main switch, no local protection.

Some others dedicate one of the spaces for a MCB (45/50A) just for the SPD, but with others like Hager, you are wholly reliant upon the DNO fuse. In this case it was a 60A (now 80A).

So need to involve the DNO (I did have a suitable fuse btw, but not up to me to change it!)

Arms
Esteemed
Some manufacturers are happy to omit protection if the suppliers fuse is below a certain rating such as Wylex shown below. 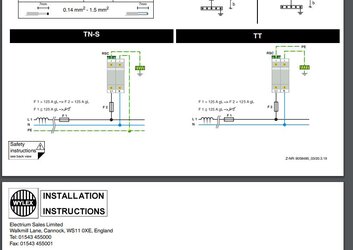 Good Morning Ian, the SPD fitted within our consumer units have built over current protection therefore an MCB isn't required for protection of the device.
They are self protecting up to 100A.

Mentor
Arms
Esteemed
Usually, if or when the MOV's inside an SPD break down and fail they pass enough current to cause a clean disconnect of the upstream overcurrent protection whether it be a fuse or an MCB. They're basically a diode with a high forward voltage and if the surge has sufficient energy the junction will break down and may become fully conductive at a voltage below the normal supply voltage. They often have some type of internal fusing but it's good practice and often in the manufacturers instructions to use a dedicated fuse or MCB as protection.

That particular unit doesn't look like any MOV failure I've seen before. I'd strongly suspect the there was a flash across the L+N caused by the ingress of the pollution you noticed.

Incidentally, what size wiring was connected to it? We'd usually use 10mm but definately shouldn't be less than 6mm IMHO.

Julie. said:
I stripped it down somewhat more, and there is a sticky substance all over the wires and parts of the internals - I assume something has been spilt from the shelf above recently - now I have been able to see it in the light of day!
Very soapy - the more I wash my hands the more soap suds I get!
Click to expand...

Caused by a basic short, then?
J

Caused by a basic short, then?
Click to expand...

Yeah, looks like it, I think the fact it was the spd is down to two things:

1) It's the most expensive part, therefore it's bound to happen there!

(sort of - see my thoughts below)

It turns out that they had a 5litre container of snowfoam (the sort of foam you use with a jetwash for car cleaning) which had leaked - but it was several days ago, and they thought they had cleaned it all up.

No idea any had gone in, and only associated it once I found the soapy residue.

Doesn't take away from the facts that it hadn't been installed properly, and if it had been protected by a local mcb, I suspect the damage would be much less.

Examining the RCBOs that were damaged (slightly) I think they suffered the same type of short due to the gunk, but tripped and cleared the faults, however by virtue of being protected by the dno fuse only, the spd was allowed to arc and burn for a long time.

No prior indication, the first time they became aware was stupid o'clock in the morning, arcs and flame sparking out of the cu. He ran round to our house, she got the kids out!

Arms
Esteemed
Now it’s getting down to who installed the Cu, cut corners and didn’t even do a tug test.

littlespark said:
Now it’s getting down to who installed the Cu, cut corners and didn’t even do a tug test.

A loose connection could have caused a fire even without soapy bubbles
Click to expand...

Yeah, it's actually quite a neat job to be fair, had I just looked at it I would have said it was a good job, now, I just want to go round there again and check all the connections!

I know mine are OK, and I checked all the screws for tightness, but didn't go too in-depth with the stuff I didn't touch.
P

Julie. said:
That bit has bothered me about the Hager (and some others), the connection is directly to the main switch, no local protection.
Click to expand...

It is obviously a bit of a trade-off as a MCB is another slot unusable for circuits, another cost, and (less obviously) has an impact on the SPD performance due to the series inductance the magnetic trip adds.

They typically have solder joint that is designed to disconnect if they get too hot which normally means a big lightning hit beyond their capacity. Not sure how pretty it would be with a open-PME style fault but I would like to think the manufacturers have t4ested for such conditions!

Mentor
Arms
Esteemed
Looks like a slow drip of the gunge on the live, bubble and squeaking for quite a while before the short and bang. It seems a bit strange as to how much of the stuff got in and what exactly happened, with it being a few days previous to the actual occurrence. Expansion of the foam, gradual heat increase, maybe...but so long after?

Reply to BANG! in the Electrical Forum area at ElectriciansForums.net