Discuss LED lights have stopped working in filament fitting but have not blown in the Lighting Forum area at ElectriciansForums.net

Hi there,
I've had LED bulbs in a filament fitting for the last year where they've worked fine. Suddenly they've stopped working but the bulbs themselves have not blown and filament light bulbs work in the filament fitting. I would rather use LEDs so can anyone suggest what the issue might be?
Thanks,
Olivia

Mentor
Arms
Supporter
Esteemed
are they 230v led lamps or 12v downlighters?
if you could post a pic of one of them it would help.

also, is any sort of dimmer involved or are they switched direct?
D

So you've been using LED lamps (BC or ES [B22,E27]) in a fitting (How many in the fitting?) for the last year and nothing has changed during that time?
The LED lamps have not 'blown' because you have tried them in another fitting and they have worked?
Conventional filament lamps also work ok in the said fitting?
Have you tried any replacement LED lamps in the fitting?

I had a similar experience on a job whereby 2lamps (LED) of six lights suddenly stopped working after approx. 3 months. They were ES lamps and found that they had 'loosened' enough to loose connection so if yours are ES try screwing them down that bit more as may have loosened in their holder.
O

I've tested these lamps in another fitting and they've worked perfectly, the fitting being a standing lamp with space for a single bulb. I've bought new LED lamps (E27, 220-240v, 9.6W) and they do work in the wall mounted fittings but at a much reduced output (compared to how they work in the standing lamp fitting I've tried them in). This result is based on one LED lamp in each fitting.

I've tried putting one of the original LED lamps (12W) in place of the new LED lamps (9.6W) in the wall mounted fitting which makes the 12W LED flicker manically and stops light output from the 9.6W new bulb.

Thanks for your help with this 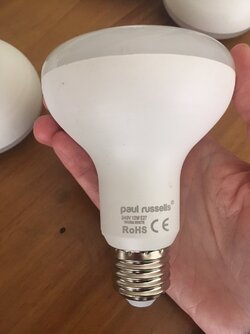 Post automatically merged: Sep 26, 2019
Forgot to say, conventional filament lamps also work in the fittings (based on one filament bulb in each fitting). I've tried screwing them in tighter but that hasn't worked unfortunately
Last edited: Sep 26, 2019

Arms
Esteemed
Can I ask if there’s a dimmer switch in the circuit somewhere?
They can make LED lamps flicker manically, as you put it.
O

Reply to LED lights have stopped working in filament fitting but have not blown in the Lighting Forum area at ElectriciansForums.net