ggrrr don't get me started 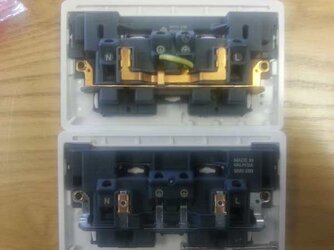 This official sponsor may provide discounts for members
A

You will find that the first socket is a CLEAN earth socket.
They also done a dual earth socket that is very similar (with COPPER bars). The dual earth one has the copper bars linked in the centre.

I have seen many of these, as I spend many hours changing them. I have seen some CLEAN EARTH sockets installed as Dual Earth which has actually broken the CPC ring as the electrician did not notice the break in the copper. We then had to inspect all 14 floors of a tall office block to ensure all sockets were installed / connected corectly for HI.

Arms
Adam please explain 'Clean E' you mean distinct from the DNO ? It seems on the older pic, lack of link would have left the 'Exposed conductive parts' ie the screw terminals not connected to the CPC ?
A

Jimmy Boy said:
Adam please explain 'Clean E' you mean distinct from the DNO ? It seems on the older pic, lack of link would have left the 'Exposed conductive parts' ie the screw terminals not connected to the CPC ?
Click to expand...

I am not entirely sure what a Clean E is.
I know it was used for IT / Telephone systems.

My understanding is that you would run a separate earth from the main earth terminal (or DB) to the Pin terminal, and the circuit CPC to the pins terminal. This is to prevent the Clean E from being a parallel path for other circuits (If installed in metalic trunking / conduit sytems).

Arms
I think ENG54 did go in to this on a thread, an E removed from the supply E
J
B

Having just stumbled upon this thread, can I shed a bit of light since we use a lot of clean earth sockets. Clean earth sockets have two separate earths one is the bridge that earths the fixing screws and the other which is connected only to the earth pin contact. The fixing screws are often in contact with the structural earth. and in many medical and IT installations the earth pin connection goes direct to the electrical earth, which may be some distance away. There may be a significant difference in potential between the two. If you take the IT situation you bit of kit may be earthed to one potential and is being fed with data from a device thatis earthed to a point which is at a different potential. This can result in corrupted data. Another example might be in a Hi-Fi system where the Amp and Pre-Amp are supplied from different locations so that the two earths are at different potentials. The result is hum. The most critical is the medical location where a patient is lying on a table that is earthed to one potential with a catheter in the heart which is connected to an instrument that is supplied from a socket that is earthed to a different potential. A difference in potential of 50 millivolts between the two could stop the patients heart. The solution is to use clean earth sockets in which the earth pin connections all go to a common earth connection, usually known as the Earth Reference Bar or ERB, which goes to the earth of the mains distribution board.

Mentor
I looked after an installation with clean earth years ago.
The Clean earth was used on the data transmission equipment.

The clean earth cable ran from each D.B exclusively used for transmission equipment directly back to the MET, not running parallel to any other cables or being enclosed in any conduit or trunking containing any other cables.
If it crossed a cable at 90' it had to have a clear gap of at least 25mm.

Reply to MK Dual E sockets old and new in the Electrical Forum area at ElectriciansForums.net