Discuss push to break timed switches in the The Welcome Forum area at ElectriciansForums.net

I am looking for a timing light switch with a difference.

Most timing light switches are designed for “Press to Make” and have a mechanical timing device which switches OFF a light after a few minutes.

I am looking for a timing switch which does the complete reverse.

I am looking for a switch which will maintain a circuit until it is “Pressed to Break”, and then stay disconnected (off) for a few (perhaps 10) minutes, after which it will re-establish an electrical connection, without my agency.

The reason? I am designing a light and buzzer system which will be triggered inside my house, by a PIR, outside my house. The PIR will do its job of lighting the front of the house in the way that it is designed to do, but inside the house I want to be able to temporarily switch off the buzzer, until well after the PIR has stopped doing its business of detecting, which can take up to 25 minutes. I don’t want the buzzer buzzing for as long as the PIR is activated, so, I want to be able to switch off the buzzing, and use a switch which will automatically reset itself till well after the next time the PIR is activated. (I don’t mind the porch light being on for 9 minutes – it won’t irritate me as much as a continual buzzing!) I could use an ordinary light switch, but I know I would forget to switch it back on it to reset the buzzer – hence the type of switch I am looking for - which would reset itself.

Thus, I need the reverse of an ‘ordinary’ timing switch. I want a “Press to Break” timer switch, and not a Press to Make timer switch!

Mentor
Arms
Esteemed
Why not just have the buzzer run for a fixed time period each time the PIR is triggered?

Have a look at GJD security lighting controls as they have this feature built in. Or else it could be achieved with a regular PIR and a timing relay, just pick one with the correct functions.

Or else to stuck with your original plan the output of a normal time lag switch can be inverted by use of a relay.

Mentor
Arms
Supporter
Esteemed
Many of the pneumatic timer switches have both no and nc contacts so will do exactly what you want. 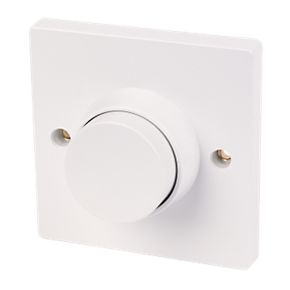 I am grateful to Davesparks and James the Spark 1976 for writing to help me. I see that the key word is "Pneumatic". I think it has helped me track down what I was looking for and I have ordered a switch for inspection. The GJD equipment was a bit industrially over engineered for my needs and I was already acquainted with NO and NC momentary switches like magnetic reed switches and door jam switches, grateful that I am with the well intentioned advice. I was begining to toy with the idea of relays but that would have involved 3 + earth cables (of which I have a plentiful supply) and it seemed rather an inelegant solution for my needs. Thanks again. I will keep you posted when I receive my Pneumatic Timer Switch. Michael

Mod
Glad our members could help. Have you got your switch yet?
Please add videos to our new video section, we're trying to populate it with good electrical videos
[Directory of Electricians] - [Electrical Videos] - [Electrical Resources and Downloads]
[Forum Sponsors - These guys pay the forum bills, please use them when possible! - Request Sponsorship Info]
[Member Subscription Options - Not required, but it helps us buy software. Remove ads, feature your directory listing]​
M

I am afraid to say that I have been rather unsuccessful. SPARKS sold me a Flexicon FTS40 pneumatic time delay switch. The publicity claimed that it had both NC and NO functions, but when it arrived it was clear to anybody that had cared to look, that it did not have a NC terminal in the place reserved for it. The plastic moulding of the switch had a position for an NC terminal but no connection. I assume it used to have the NC function as its publicity picture showed, but Flexicon had not informed sellers of the change to its design. SPARKS apologised, and changed their advertising picture, but I am not sure whether or not they expect me to meet the cost of postage back to them. I have spent several hours again searching the internet for what I need to no avail. Many sellers claim that their switches have both NC and NO functions, and I have written to many asking them to check the backs of their switches for evidence of NC connectivity - once bitten twice shy.
Somewhere in Australia, a company claims to produce an NC switch for domestic use. I am waiting on their reply to me.
Its green Martian time again! Am I the only person in the UK who needs a simple domestic NC (Normally Closed) timing switch?
Can anybody help me?

Mentor
Arms
Esteemed
The old fashioned columbus switch linked to above has both NO and NC contacts.

Most electrical wholesalers will have these on the shelf.
M

EUREKA, I have found it. After 5 weeks of searching, my local ScrewFix had it all the time. TLC said they could not help. Flexicon duplicitously said they had a Normally Closed timer switch when they didn't. I got so paranoid that I forced the poor man at ScrewFix to open the Columbus packaging blister to check that the contacts were in place on the back of it. They were! I brought it home and it works exactly as I wanted it to. I am a very happy bunny. Thanks to every one who guided me towards the final result, by giving me the correct terminology: "NC", "NO" and "Pneumatic". Even when you've got the right words, advertising just simply lies. Thanks again to Davesparks et al. Michael

This official sponsor may provide discounts for members
Advertisement - Content continues below
You must log in or register to reply here.

Reply to push to break timed switches in the The Welcome Forum area at ElectriciansForums.net